Rev. Sullivan, through his affiliation with other ministers, organized a boycott of various businesses which he referred to as “Selective Patronage”. The slogan was “Don’t buy where you don’t work”.  The boycott was extremely effective producing thousands of jobs for African Americans in the Philadelphia region in a period of four years. Sullivan realized that simply making jobs available was not enough. His philosophy and principles of self help led to the formation of several entities in the future that would both address training for employment and African American business ownership. 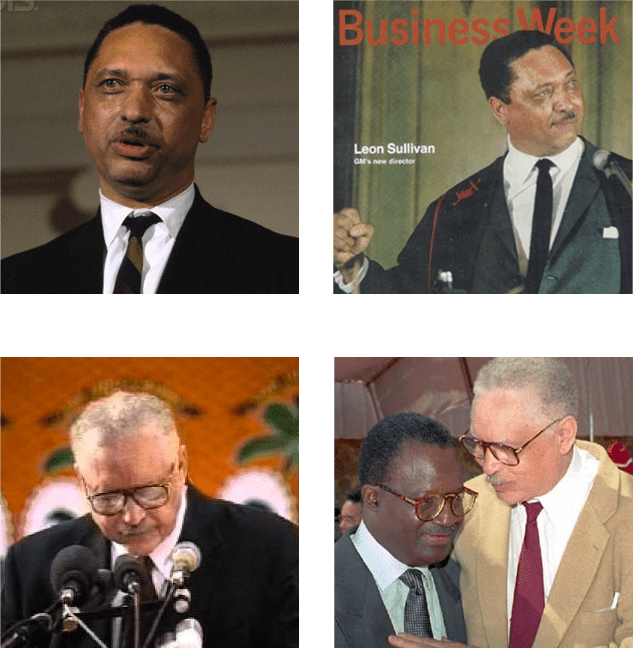 Reverend Leon H. Sullivan was born in Charleston, West Virginia on October 16, 1922. He was raised in a small house in one of Charleston’s poorest sections, but richly influenced by his belief in God and the teachings of his grandmother, who he said was, “a constant and powerful presence in my life who taught me early on the importance of faith, determination, faith in God, and especially self-help.”

At the age of twelve, he purchased a Coke at a drugstore and when he went to sit down, a white man told him “stand on your feet Black boy”. That incident, along with his grandmother’s direction, and his faith in the power and authority of God, helped transform a 12 year-old boy with humble beginnings into a 6’5″ man who would break through racial barriers and move mountains.

Reverend Sullivan fought for principles of self-help, created opportunities for the under privileged and accomplished 38 years of pastoral duties. He received recognition as a local, national, and international civil rights leader and was the first African-American to serve on a Fortune 500 Board of Directors.

Reverend Sullivan created numerous businesses, that later were and are described as the Sullivan Entities.

During his lifetime Reverend Sullivan has been awarded many honorary doctorate degrees and has written several books.

Reverend Sullivan also received many awards and honors including:

As late as 1960, less than 1% of Blacks had meaningful jobs in Philadelphia, PA. There were limited opportunities. “The doors were closed”. Reverend Dr. Leon H. Sullivan felt it was his mission to either “get the doors opened or knock them down.” So, he along with 400 ministers used their pulpits to persuade the Philadelphia black community to use its purchasing power against companies who refused to comply with the request for fair job opportunities. The campaign, known as Selective Patronage, first targeted Tastykake, and later took on over 29 firms. In 1962 some 300 businesses in the Philadelphia Delaware Valley area agreed to a policy of fair employment practices. Tens of thousands of jobs opened to black workers. The success of the selective patronage movement prompted Dr. Martin Luther King Jr. to call Reverend Dr. Leon H. Sullivan to help him develop a similar program for America. It would be called “Operation Breadbasket” and be led by Reverend Jesse Jackson. 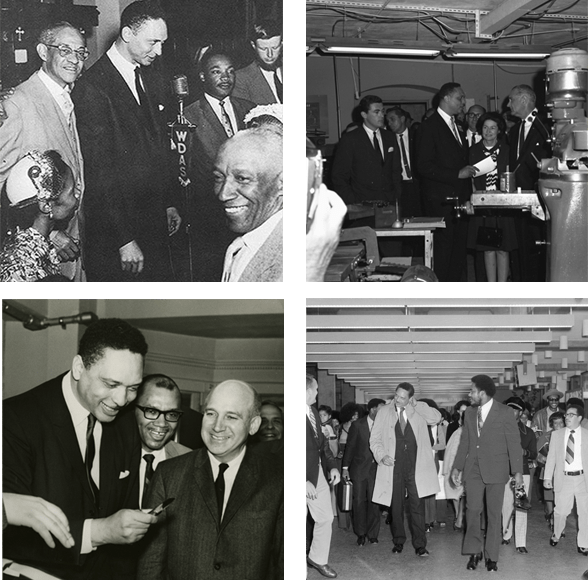 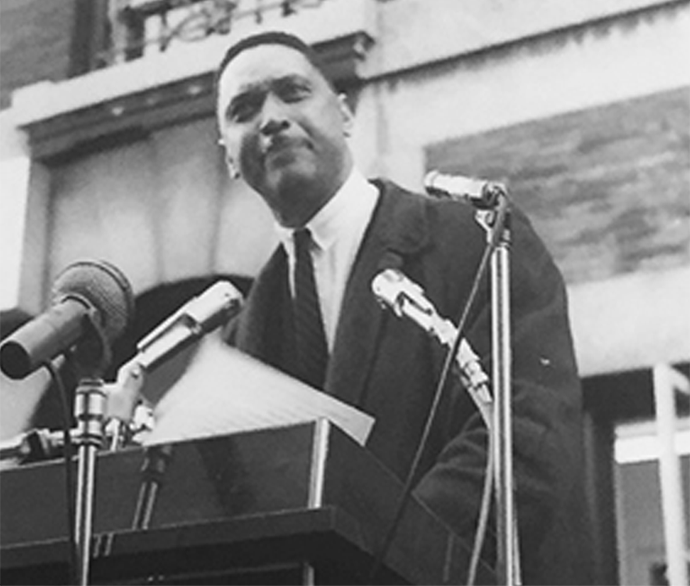 On June 15, 1962 during a sermon inspired by “Jesus feeding of the multitudes” as found in John 6:1-14, Reverend Leon H. Sullivan announced an unprecedented community investment strategy. His plan involved masses of community people in business ownership and community development. The strategy was called the 10-36 Plan. Each participant was asked to set aside $10 each month for 36 months to raise funds to initiate housing projects, shopping centers, business enterprises and human and social services. That Sunday fifty church members signed on. The next Sunday 250 more signed on.

Thus, this set in motion the whole Progress Movement (long before such terms as “black capitalism” or “minority enterprise” became fashionable). The 10-36 Plan, an integral part of the overall Progress Movement, was designed as a way to combine and multiply community resources. It was, and still is, a self-help community and economic development initiative.

In 1965, after demonstrating the success and capabilities of the program, subscriptions were again accepted and the number of participants grew to 450.

In 1968, the program again accepted new subscriptions and the number grew exponentially to 3,300.

The 10-36 Plan was a broad-based program to improve the community. It was built on four premises: (1) an operational definition as a “people’s campaign”, (2) community development of its own resources for its own needs, (3) community involvement in its own destiny, and (4) a basic belief in the “self-help’ doctrine.

Primarily promoted as a “Program of Faith,” the success of the program has become known worldwide and has become an inspiration and model for community investment strategies around the world.

The Zion Non-Profit Charitable Trust, now Leon H. Sullivan Charitable Trust, was the first entity Reverend Sullivan created to sustain the Progress Movement as part of the 10-36 Plan because he wanted Plan participants to understand the “primary value of charity before profit.” The “charitable” act of over 3,000 10-36 Plan participants immediately provided the Trust with a donor base unheard of among Black organizations then and now.

The 10-36 Program was an early successful version of the current efforts called “Crowdfunding”, demonstrating that a small or large group can come together and accomplish a big thing when they have faith in the planned outcome.

Rev Sullivan established the International Foundation for Education and Self Help (IFESH), which had several programs whose goals included literacy training for one million people during the 1980s, the Teachers for African program and the International Fellow Program  The organization, based on the same principle of faith and self-help, continued to play a major role in the development of sub-Saharan Africa.

In 1971, Sullivan became the first black to serve on the board of a major corporation, General Motors.  This new chapter in his life would grow to help bring down history’s most unjust and inhumane systems of racial segregation: South African apartheid.  His tenure on the board and a trip to South Africa, led to his development of what became known as the Sullivan Principles which gave companies in the United States and around the world an effective, systematic way to break down the wall of apartheid through peaceful economic means.  This led to the end of apartheid and release of Nelson Mandela. Sullivan’s behind-the-scenes work while on the Board of General Motors included several meetings with world leaders, including Nelson Mandela and Pope John Paul II.

In 1991, Rev Sullivan established the Biannual Africa African American Summits.  The summits were designed to help formulate practical ways to help with education and the economic and cultural advancement of the nations and build economic partnerships.  The first summit brought 300 people from America, the ”Historic 300”, the largest contingent of African Americans ever to return to Africa, representatives from hundreds of companies, major firms, educators, professionals and just ordinary people.  In addition, African heads of state came along with prime ministers and top government officials from 26 African nations. These summits continued for years building a bridge between Africans and African Americans.

Other Books by Leon H. Sullivan